The second book in my Cyrus Cooper series went on sale through Amazon first thing this morning.  Rogue Faction Part 1 is the first half of a pair of novels that comprise a single larger story.  It has everything you would expect: murder, mystery, mayhem, and lots of action.  If you were wondering what comes next for Cyrus Cooper after the events in Dangerous Minds, I don’t think you will be disappointed.  Cyrus is back in action, this time working a new case that’s near and dear to his heart.

Part 2 of this story should be released shortly after the first of the year.  Since Part 1 is “To Be Continued,” I don’t want anyone left waiting for the rest of the story.  Part 1 is action packed, but Part 2 is going to take folks places they didn’t expect.  It should be a lot of fun… and it might pull at some heart strings along the way.

From the back cover:

When a Russian neuroscientist develops a cutting edge tool to aid in the treatment of Alzheimer’s patients, the breakthrough could be a modern medical miracle. This technology will allow doctors to record and examine the memories of patients, offering insight into a disease that was previously only the stuff of science fiction. Unfortunately, as with every ‘creation’, the bad comes hand-in-hand with the good. The ability to record thoughts and memories directly from a person’s mind becomes an even more valuable process when utilized as a weapon…for espionage.

Fledgling agent, Cyrus Cooper, is ordered to infiltrate the facility developing this powerful new process. His duty: protect the secrets of this dangerous new system and the mastermind behind it until work has been completed. But as Cyrus soon learns, news of the medical breakthrough has leaked. There are now organizations that will stop at nothing to acquire it for themselves. And his own team, the Coalition, just might be among them.

Matters are complicated further when Cyrus’s past catches up to him in the middle of the operation. He’s left struggling to do his job while trying to protect secrets from his own background that will jeopardize his very life should they reach the wrong ears. Through the mayhem, Cyrus never sees the dangerous, faceless stalker who is determined to cause him mortal harm. The action intensifies and the mysteries mount as Cyrus Cooper is put to the ultimate test in, Rogue Faction Part 1. 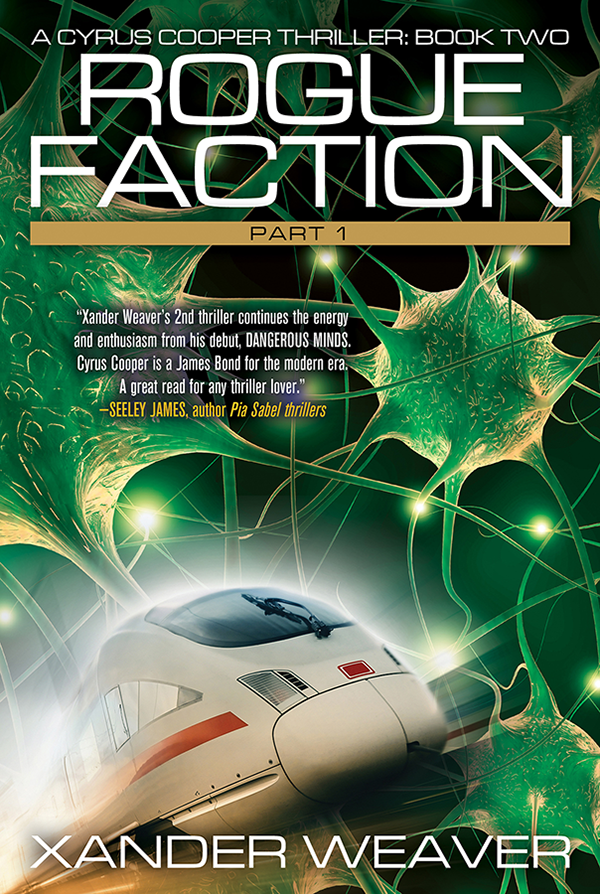 You can find a full list of my books on my Amazon Author Page.  You can keep up to date on the latest news by subscribing to my newsletter.  I only send email when I have important new news, like the release date for a new book or a special giveaway.  Plus, you can follow my Facebook and Twitter pages.